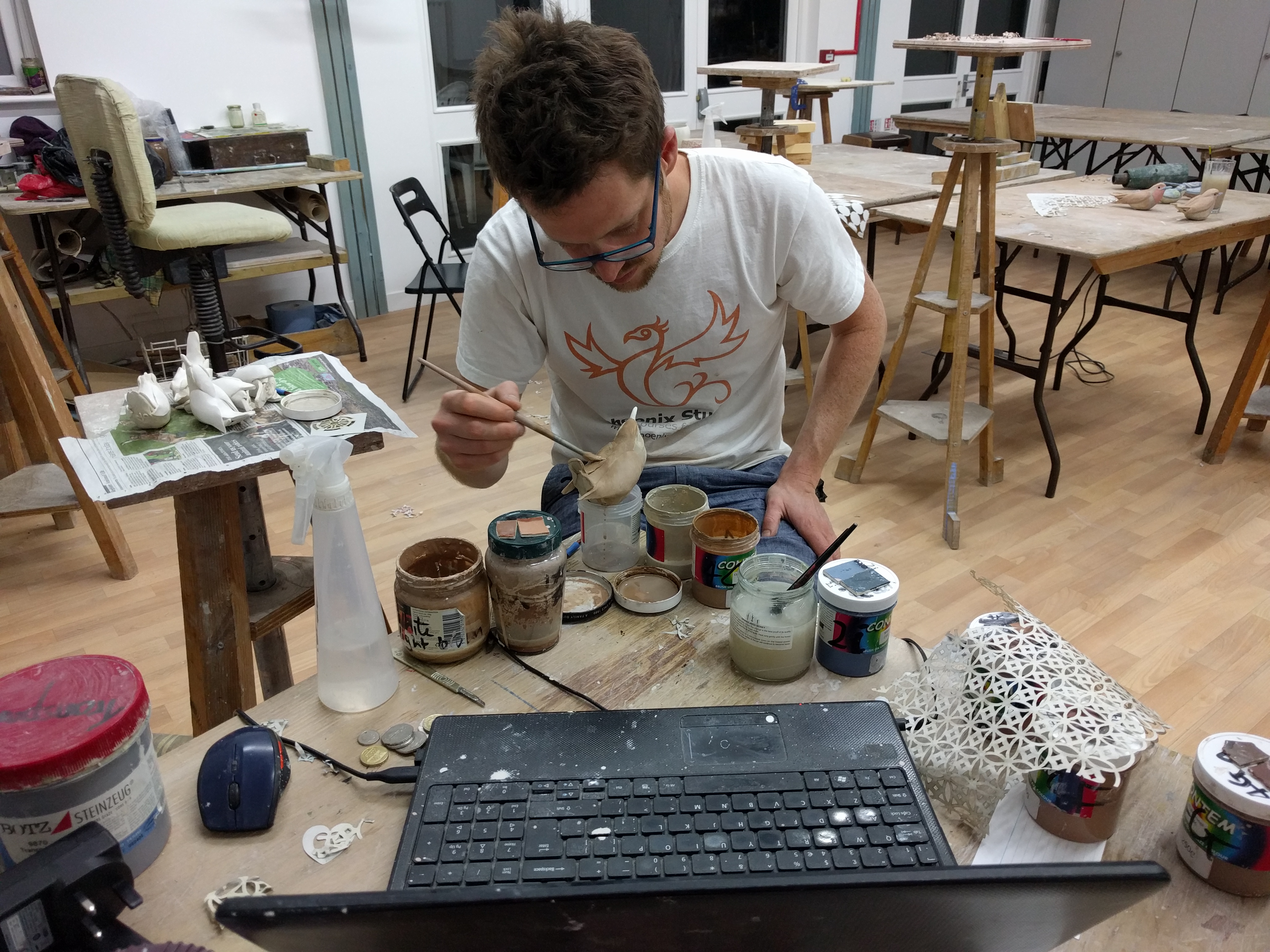 So it has been a while since my initial flurry of posts.

The feathering of my nest has taken me longer than I thought.

It's also been a hectic few weeks. I have had a couple of wonderful weekends teaching wire, put a fantastic school project to bed and my owl has been the poster boy for the Oxford Art Society.  All of which have been both fun and inspiring.

Not much sculpture has been made though.  And this has not gone unnoticed...  Least of all by Gaby Turner, who seeing me procrastinate on more than one occasion, took it upon herself to write me a wee poem.

As was World Poetry Day on the 21st March it seemed right to share it.

On hearing it I simultaneously smiled, laughed, got cold sweats and a overwhelming sense of nausea.

Needless to say, it has been a wake up call. Time to get working....

So without further ado...

Here’s the tale of an artist with lots on his plate
who liked to procrastinate.
It’s here to remind you: don’t leave things too late
as the stress will accumulate.

James was an expert in not getting done
all the things that he needed to do.
Each day his to-do list’s a hundred things long
and ends up being a hundred and two.

Now, with four exhibitions in which he’s taking part
and forty-odd sculptures to make,
you’d think he’d be endlessly making new art
but no, here’s his fatal mistake:

When time is tight just take your list
and work from last to first
important things should be dismissed;
priorities reversed.

Design a decal for the van,
install a shelf or two;
screw on the handles, handyman,
and label jars of goo.

He’ll fix the sculptures others break
then give them legs and eyes,
play board games over tea and cake;
aerobic exercise.

Friends would ask “How’s it going?” and James would reply
“oh quite slowly,” and he would explain –
“Art in Action’s not till the fourteenth of July
so don’t panic, that’s twelve months away!”

He swept and mopped; he stacked and chopped
to keep the stove alight.
He mowed the grass, tended his crops,
cooked dinner every night.

“How’s the art going James?” With a nod he’d reply
“not too bad” and he’d tell them again –
“Art in Action’s not till the fourteenth of July
so don’t panic, that’s six months away!”

He checked the praying mantises
a dozen times a day
and sometimes sketched the fantasies
of what he’d – one day – make.

“What have you made James?” and James would reply
he’d start “soon, or tomorrow, okay –
Art in Action’s not till the fourteenth of July
so don’t panic, that’s three months away!”

He’d get his inbox down to nil,
make sure the bills were paid;
spent evenings loading up the kiln
with what his students made.

He wasted a morning, he wasted a day;
pretty soon he had wasted a week
When that week became months people started to say
“hang on, what’s going in your boutique?”

“If you make things then where are the things that you make?
If you paint, well then what do you paint?
Show us creatures, and wonders; the sculptures you bake:
You’re an artist? It seems like you ain’t!”

“James isn’t it time you made something to show?” “Why
must you keep moaning,” he’ll say –
“Art in Action’s not till the fourteenth of July
so don’t panic, that’s a whole month away!”

“Oh no, now it’s July and no sculptures exist!
Nothing’s done and there’s two weeks to go!
Quick quick, write some lists, then write lists of the lists
of the things I must make for the show.”

A cheetah arises before the day breaks,
racing fast to the finish line.
By lunchtime, a lion, a couple of snakes:
“I’d enjoy this if I had the time.”

On the final day James just can’t do any more
and he sits back to see what he’s done.
His eyelids are drooping, his fingers are sore;
no sign of the thing that’s called fun.

The safari’s ok but because of delays
there are birds made from unfired clays;
there’s a tiger that’s shite
and a toucan that’s white
as he ran out of time for the glaze.

Art in Action kicks off, and kicks off with a bang,
but instead of the forty he planned,
there’s ten sculptures for sale
what a miserable fail!
By the end of day one: empty stand.

Dearie me – he was more in demand than he thought
and he sold every one of the pieces he’d brought.
So what will he do
when it comes to day two?
Now what will you sell, Mr Ort?

“I wish I’d begun back in March,” he declared,
“and I wish I’d done more to prepare.
If I had made forty
and not been so naughty
I might be a millionaire!”

James Ort is a ceramic and wire sculptor working from the Phoenix Studio in Towersey, Oxfordshire.